The Expert Witnesses You Need,
No Markups, No Referral Fees 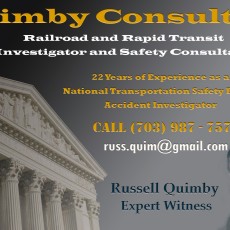 Company Name: Quimby Consulting LLC
Education and Credentials:
Mr. Quimby received a Bachelor of Science degree in general engineering from the United States Military Academy at West Point, NY in 1974 and spent 5 years as an active duty Army officer in a variety of assignments followed by 10 years as an Army Reserve railway planning officer. During his military time, he was airborne qualified, earned the coveted Ranger tab, and was awarded the Army Commendation Medal for his work reorganizing the Army Reserve Railway battalion. After a year as a management trainee in 1980 on the Burlington Northern Railroad (BN), he worked in several progressively more responsible managerial positions in the BN mechanical department. He qualified as a BN locomotive engineer in 1980 and 1983. In addition, he studied railroad track design, analysis and maintenance at the Institute of Railway Engineering, University of Delaware. He has been certified in hazardous waste operations and emergency response since 2001.
Specialties:
Mr. Quimby's specialties include railroad and rapid transit accident investigation, particularly rolling equipment and motive power, event recordings, track, operations, train handling, and human performance. He retired from the National Transportation Safety Board after 22 years as an investigator-in-charge in 2007 during which time he participated in 57 major accident investigations, 32 field accident investigations, 10 public hearings, 16 depositions, and 6 special studies.  He wrote 11 major accident reports, 8 field accident reports, and personally conducted 10 sworn depositions. Mr. Quimby was responsible for over 157 adopted NTSB safety recommendations in all facets of rail transportation. Mr. Quimby previously worked for the Burlington Northern Railroad from 1979 until 1984 as a mechanical department manager. After his NTSB retirement, he became Assistant Vice President of Operations, Planning and Analysis for Rail Sciences Inc. from 2007 until 2008.
Experience:
Mr. Quimby has 35 years of professional experience, with the last 9 years as the president of Quimby Consulting LLC. As a specialist in railroad equipment, track, operations, and human factors, he performs expert witness work for lawyers in commercial and personal lawsuits, and he frequently works on both corporate and liability lawsuits. Through this legal work, he reviews testimony and exhibits, visits relevant sites, and writes reports, including facts, analysis and conclusions. Quimby Consulting LLC is a rail transportation, intermodal, and railroad services company that provides consultations in legal cases involving railroad and rapid transit accidents and incidents.

Please login or register to add your review.